As part of the Royal Armouries led Roll of Honour Project, the RSA Island Centre hosted the unveiling of a plaque commemorating the workers of the Royal Small Arms Factory in the First World War.

Prior to the unveiling attendees convened in the Community Hall on site and were treated to a buffet lunch before being welcomed to the Centre by RSA Trust chairman Gary Walker. An additional speech by Royal Armouries Head of Archives, Philip Abbott gave the attendees some background to this Heritage Lottery Funded project before local historian Jim Lewis did the honour of unveiling the plaque itself. 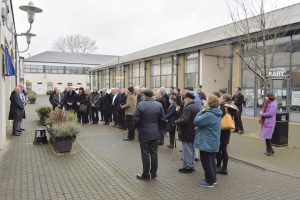 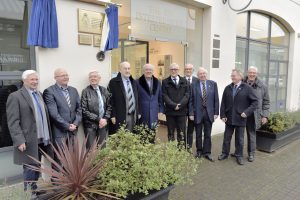 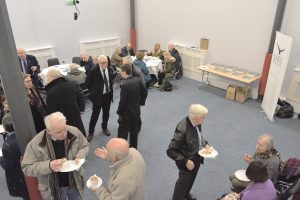 Attendees enjoying the hospitality of the RSA Trust

The project team and the RSA Trust staff are grateful to Gary Walker, Martin Jewell and the other Trustees of the RSA Trust for hosting this event and welcoming attendees to the Centre. The Trust are incredibly grateful to Philip Abbott and the Royal Armouries team who set up the Roll of Honour project and have made this memorial plaque possible. The work of John, Jan and Stacey from Enfield Museum & Local Studies has also driven this project forward and we’re grateful for their support on the day as well. Ray Tuthill and the RSAF Apprentices Association have been instrumental in not only sourcing objects and helping the Trustees of the RSA Trust set up the RSA Interpretation Centre, but have also aided the research for this project. Finally we’d like to thank Jim Lewis for his pulling the rope to unveil the plaque to the world. His passion for the Lea Valley and knowledge of the history of the Royal Small Arms Factory are second to none.