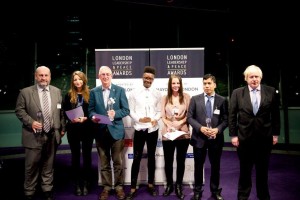 Gary (far left) and the other award winners

RSA Trust Chairman, Gary Walker, was the proud recipient of an award at the London Leadership and Peace Awards which were held on 10th December 2014 at City Hall.

The London Leadership and Peace Awards celebrate individuals and organisations who make a noticeable difference with their efforts in the capital. The awards ceremony was hosted and arranged by the Peace Alliance, a national charity that focuses on local communities and initiatives aimed at reducing crime.

Gary Walker was presented with the individual award for benevolence by London Mayor Boris Johnson; the award criteria being “An individual who has over the years shown outstanding care, compassion, kindness, sacrifice and commitment for the well-being of others.”

Mr Walker is a local businessman who carried out the regeneration of the Royal Small Arms Factory in Enfield, which generates a surplus which funds The RSA Trust, a charity that he co-founded in 2004, which in the last 10 years has distributed in excess of £4,000,000 to numerous good causes in the north east London vicinity. He also serves on the board of the Enfield Island Youth & Community Trust, which provides support and positive opportunities for young people in and around Enfield Lock & Enfield Island Village.

Mr Walker commented: “Whilst I did not set out to receive this recognition, it is nice to be acknowledged by the London community for the regeneration and charitable work I have done.”