In the tradition of the Enfield’s engineering excellence, Metaswitch Networks last week brought the scale model of the Bloodhound Supersonic Car to CHENEL’s Enfield Campus, with the assistance of Chairman of the RSA Trust and EBT Trustee of Metaswitch Networks, Gary Walker, The Bloodhound Supersonic Car is being built to break the Land Speed Record (and the sound barrier), travelling at over 1000 miles per hour. To do this, the car will use a jet engine and a rocket, fuelled by rubber and hair dye. 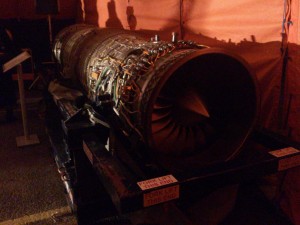 A close up of the Bloodhound Jet Engine

The jet engine will bring the car up to speed over a 12 mile track in the South African desert. Then the rocket will launch the car to supersonic speeds, breaking the Land Speed Record. Sodium Peroxide (used in most hair dyes) will cause a solid rubber fuel inside the rocket to quickly rot down, producing an explosive blast of heat, water and oxygen. If that wasn’t enough a Cosworth Formula One Engine will power the rocket?s fuel pump and the steering and suspension in the car.

Children and young people from across Enfield, including Enfield Island Village saw the car and were treated to many activities, including making their own balloon rocket powered cars. James Musgrave, of the Enfield Island Youth and Community Trust said of the event “the opportunity to stand next to, get a sense of and experience this car was significant for our children. We often talk and encourage participation in events that raise aspiration, but to experience and experiment with ideas and concepts next the ‘the actual car’ was inspiring for young minds. Experiences like this capture the imagination of our children and give us the opportunity to harness imagination with skills that turn ideas into reality.”

Metaswitch Networks brought the car to Enfield in association Gary Walker to help inspire Enfield?s next generation of engineers and scientists, 22 years after the Royal Small Arms Factory closed its doors. He explained the importance of the project and why it came to Enfield, “We know that the UK has a shortage of Engineers and this will get worse over the next 20 years. Unless we inspire our young people and show them how exciting engineering is, the UK will not be in a position to continue to innovate and do top class engineering. Metaswitch is a world class software engineering company and is proud to bring the Bloodhound to Enfield and help inspire our young people.”

The Bloodhound Supersonic Car will attempt to beat the World Land Speed Record in 2013 and then break 1000mph in 2014.

Since 2001 the RSA Trust has donated around £2,500,000 to good causes in North London and is committed to developing opportunities for young people and their families. As well as sponsoring youth provision on Enfield Island Village from 0-19 years of age, the Trust has sponsored Chingford Model Engineering Club to expand its facilities.